HISTORY CONTINUED
The "Snap":
Then on August 2, 2019, tragedy struck. With most of the U.M.S.M.'s population switching from middle to high school, many citizens and government officials had to leave the U.M.S.M. as there would be a giant communication barrier. One of our newest, Emir Kliko stepped up to fill one of the most important positions, the position of Strategic Command General, the position responsible for the defensive and offensive strategy of the U.M.S.M.. On August 13, 2019, we appointed him this title.

Sadly, The Rock, Alex Wang, also quit the U.M.S.M. due to him having to go to a new school. The government, learning from its earlier mistakes, knew they needed to find a new Rock quickly. Thankfully, a citizen volunteered for the position! He valiantly keeps the nation together. As the population recovers from having half of the working force disappear, the U.M.S.M. now enters into a long time of prosperity.
The Diplomatic Era:
During a period from August 25, 2019 to February 7, 2020, the U.M.S.M. has seen a great influx of diplomatic activity with other micronations. The U.M.S.M. allied with the many other micronations, to become more involved in the micronational community, and learn more about fellow micronations.

Renaissance (Rebirth):
This surge of activity began when The Supreme Leader realized the U.M.S.M. has a navy but does not have any deployments, due to the U.M.S.M. being landlocked. The sailors from the navy were reassigned to the Border Guard. Ben Ellis IV was appointed as the Brigadier General of the Border Guard. Following this, the Strategic Command General at the time, Brenden Scott, stepped down. He was replaced by Sam Curran, a veteran of the U.M.S.M. army command. The U.M.S.M. has not seen this kind of activity since 2018 when the government was being set up.

Transfer of Powers:
On January 26th, 2021, The Cabinet, with permission from the Supreme Leader, voted unanimously to remove the Supreme Grand General from office, as he had become inactive. The Supreme Leader appointed Rafe Schmitz to succeed him, and Rafe will be succeeded by the Minister of Art Eddie Conversi. Quinn will take on the position of the Minister of Art. Followed with all these changed, The Cabinet also voted majority to made an addendum to the isolationist policy, and allow alliances.
On January 30th, 2021 Quinn Rollins went AWOL, and has not been heard from since. His position was filled by Star Hamilton, veteran member of the U.M.S.M.

A New State Is Founded:
On 3/7/21, one day before the U.M.S.M.'s 7th anniversary, the Brigadier General and the Supreme Leader were discussing the future of the U.M.S.M. They both decided that a new state would need to be formed. The idea was brought to the cabinet. The cabinet loved the idea.

20 minutes of debate later, the name and flag design had been decided. The state would be called Bentonia and would be located in Benton Park, St. Louis MO, near the state of Dytusstein. Ben Ellis IV would take on the role of Chancellor of Benton Park.

This new state also brought new questions that must be answered. Should each member of the Supreme Cabinet run their state? The Cabinet and Supreme Leader decided yes. Ragrad's control was transferred from the Supreme Chancellor Eddie Conversi to the Commander of Religion and Sciences Montana Knight. At this time a 6th state for Commander of Security Zach Bailey had yet to be founded.

While the Supreme Cabinet was active, they also decided on a long-standing activity issue. Should the role of Strategic Command General continue? They decided no. The role was dissolved and the duties were given to the Supreme Grand General of the Armed Forces.

Quiet time in the politics of the U.M.S.M. was interrupted a month later when many policies began to be called into question. A few positions being shuffled around, such as on 4/26/21, the Senate voted on reforming the government position of "The Rock". They decided (14-0) that the rock should be more of a neutral debate party, rather than a scapegoat. A day later on 4/27/21 the Supreme Leader asked the question everyone was wondering. "Did the name U.M.S.M. fit anymore?". They decided no. And after 2 days of hot debate a name was settled on: "The Grand Republic of Moontonia". The Senate and Supreme Cabinet convened to vote. After a long few hours of voting, the U.M.S.M. decided 25-4 to change the name to "The Grand Republic of Moontonia".
​
​
This marks the end of the Moontonia's current history. You can become a part of it by signing up for citizenship and doing your part for the most glorious nation. Thank you!
Last Page 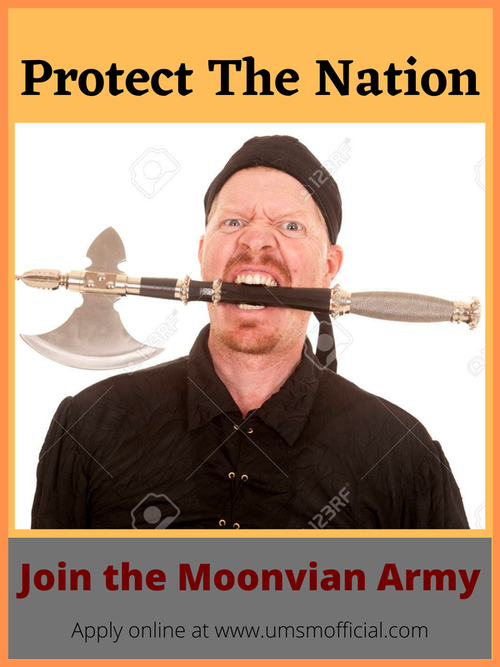