HISTORY
Construction:
The Grand Republic of Moontonia's history is very brief as we are still a very young micronation. Moontonia was founded on March 8, 2014, by His Majesty the Supreme General Commander Grand Sergeant Major Chief Master Sergeant Supreme Leader King Iain Turnbull, Leader of The Grand Republic of Moontonia, Governor of Moonvia. At that time Moontonia was called Pensklandia. The Supreme Leader wanted to create a nation to advocate for the preservation of nature, and he wanted a perfect nation, one ran by himself, so he could guide the people to greatness. Pensklandia was a very simple nation, one ran only by the will of the Supreme Leader and the laws which governed nature. Citizens were not present in these early stages. The Supreme Leader wanted to ensure only people who shared his ideals joined. Over the next 3 years, Pensklandia would slowly progress into the final construction phases. During this time, the Supreme Leader grew impatient, fearing that natural preservation was not being taken seriously, and that progress on it was too slow. He knew what he would need to do. He needed to grow Pensklandia even further.

Final Construction Phase:
On March 8th, 2017, exactly three years after the nation's founding, the Supreme Leader appointed Quinn Rollins to Supreme Grand General of the Armed Forces. Of course, they had no armed forces at the time. They knew they needed to create a working government first, and so they did. Progress remained slow for the coming year as they spent the time finding extremely trustworthy peers to help them grow the nation.

A few months later on March 9, 2018, the Supreme Leader appointed Rafe Schmitz as the Supreme Chancellor to help govern the many states they knew would be formed. One more year was spent filling positions with qualified individuals, capable of running the country. At this time, with the influx of a larger government, Pensklandia changed its name and flag. Pensklandia was now called the United Soviet States of the Moon, or U.S.S.M. The name change came after the recent acquisition of the U.S.S.M.'s first territory. Its famed province on the moon, Ragrad. After this, the leaders decided it would be a good idea to establish the armed forces. They established the Border Guard, which is often referred to as the "Old Guard" because it was the first branch of the army to be established.

At the time, the U.S.S.M. was influenced by many communist ideals that originated in Pensklandia, as the action of preserving and maintaining nature had to be done by many people, and thus many things must be shared. This "sharing" ideal transformed into communist ideals, that would influence the U.S.S.M. for the year to come including the many laws, images, propaganda, and ideals that would be adopted.

On January 8, 2019, the U.S.S.M. finally launched a campaign to gather citizens, and people poured in faster than the current government could handle. The highly unprepared government, quickly created systems to accommodate a large number of people gaining citizenship. On the first day, 15 people joined, on the second day 12 people joined, and on the third day, 4 more people joined, officially ending the period of rapid growth.

The next day, as things settled down, the ranking system was put in place. The system outlined a pyramid of power, with the Supreme Leader at the top. The top rank was called "0". The ones below him were called 1sts, below them the 2nds, etc. See the image below for a visual representation.​ 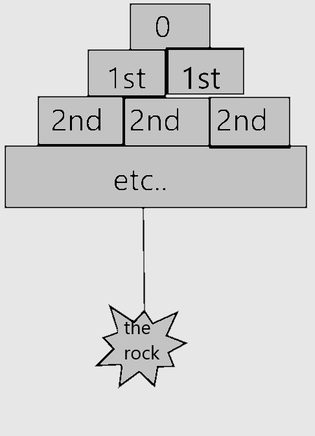 At the bottom, lies a rank called "The Rock" this rank is either given to a prisoner or a volunteer* (No one is forced to be the rock, prisoners have their sentence revoked and no one is required to volunteer.)
Even though this rank is below the bottom, it's arguably the most important role in the entire county other than the leader.

The purpose of The Rock is to hold the country back from to rash of ideals and ideas, be the scapegoat, keep progress detailed and slow, etc. In other words, the rock is our system of checks and balances. In times of need, The Rock's true power prevails. At this point, the U.S.S.M., 2 years after communist ideals were introduced went through a "De-Communization" period, where they removed communist ideals and made themselves more "politically correct". Many of these new changes were praised and accepted by the Supreme Leader, who had since realized the fault in the communist system but was unable to change it due to the government members who opposed and outnumbered those who were for wanting to remove communist ideals. The U.S.S.M. also voted on and went through another flag and name change. It was now called the United Military States of the Moon.

After these events, order and prosperity came to the country. Jobs were created, the government became larger and more complex, everyone was happy, and everything was working. However, this time of paradise was short-lived. ​
The List "Snap":
On February 25, 2019, a vote was held to add a new state to the U.M.S.M., Grünlandstadt (German for Grassland City). Up until now, the U.M.S.M. was using an online Google Document list of people, including rank, job, and voting count. At 8:00 am, the Supreme Leader went to add the new state to the list. However, tragedy struck, half of the list had vanished. The country went into a panic. Weeks of the most detailed of work gone and years of organization lost. They hastily searched to find the culprit.

After many hours of investigation, the case had a breakthrough. On the Google Doc, the Minister of Intelligence Zach Bailey noticed one person had access to edit. First Class Private Alex Wang. He was quickly apprehended and interrogated. He pleaded not guilty to breaking law #19: "Any altering without permission or disregard for government documents is treason.". A court case soon followed where he was found guilty and sentenced to exile to Switzerland. The list was reverted to an older, save. Not a very easy fix, however better than nothing. Even though they were thinking that the day could not get any worse, it did.
​
​The Dark Ages:
On the same day that Alex W. was exiled, the current Rock of that time quit his job. At the time, the government did not know the importance of The Rock, so they shrugged it off. One week later, with the absence of the rock, the county was plunging deeper into debate, almost to the point of civil war. With the Rock gone, they had no one to blame for their misfortune, which made them blame everything on each other. Then they realized, that all these issues were all because of there being no rock. Alex Wang was quickly pulled back from exile and given the title of The Rock as we had no prisoners, and no one was volunteering. After the dubbing of the new rock, the government almost immediately returned to peace. The nation was once again at rest. This 8-day long period is called the dark ages.

A few days later a plan for a coup d'état was uncovered by the ex-Minister of Internal Affairs Gavin Christopher. The culprits were swiftly arrested by the nation's military, and disciplined. It was apparent that the county needed a secret service to protect the upper members of the government. This group would be named the "D.D.A." or "Drittel der Armee", Which is rough German for "3rds up army", to signify that 3rds and up are the most important. This section of the military would be run by Zach Bailey, a man who had experience with security and interrogation.

A few weeks later the government gained a new section. The Supreme Cabinet. This is a section for the elite of the elite. There are 6 members of the Cabinet: The Supreme Leader, the Supreme Grand General, The Commander of Religion and Sciences, The Supreme Chancellor, Commander of Security, and the Brigadier General of the Border Guard. These extremely important roles are necessary for the nation's survival, and that is why if they unanimously agree, their decision cannot be overridden.

On May 24, 2019, the U.M.S.M. officially broke with the last of its communist ties. The Supreme Leader dubbed this day, Independence Day.
Next Page